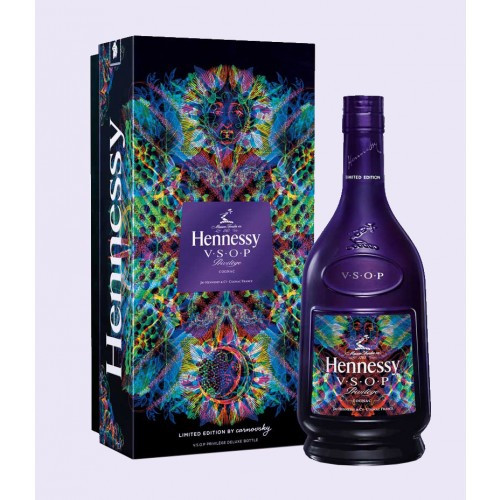 Hennessy VSOP Privilège 2016 Limited Edition Gift Set is designed by CARNOVSKY, an Italian duo based in Milan with tons of artistic talent. Hennessy V.S.O.P Privilege has notes of French oak, vanilla, cinnamon, clove, and candied fruits. It should be enjoyed neat or on the rocks. Cocktails are always an option, but will not optimize the full flavor. The 2016 Hennessy V.S.O.P Privilège Limited Edition bottle has a limited supply and will only be available as they last. It is expected to sell out at a higher rate than usual.

CARNOVSKY, which consists of Francesco Rugi and Silvia Quintanilla, first founded their studio in 2006 and grabbed the world’s attention with the “RGB Project.” They combined 17th century illustrations with a digital technique using the technology world’s primary colors: red, green, and blue. The unique vision comes to life on the box itself and the label of the Hennessy VSOP. Leaflets are included in the limited edition gift set along with colored filters to enhance the illustrations this duo created for the bottle. Customers are invited to invent their own RGB symbols on craftmysymbol.com to express their personal identity.