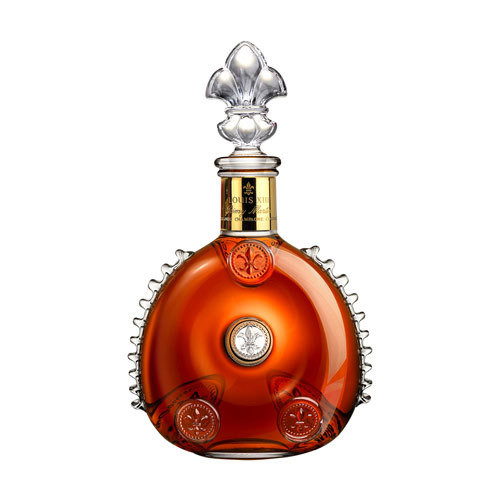 It tempts the eye with rich, warm hues of mahogany, characteristic of long-aged eaux-de-vie. It teases the nose with unmistakable woody notes, evocative of century-old oak casks. And then, all at once, it explodes in a firework of flowers, fruits and spices, a dizzying alchemy of extremes.

The highest-quality cognac on the market today, Louis XIII de Remy Martin has been carefully tended by three generations of Remy Martin cellar masters. Louis XIII de Remy Martin uses only grapes from the Grande Champagne region, guaranteeing its unique, exclusive quality. It is blended from eau-de-vie, some more than a century in age, and then aged in "tiercons," barrels that are several hundred years old, in a special cellar all its own. The result is a magical combination of savoir-faire, art, and patience.

Its name evokes the landmarks of history. The famous personalities who made it theirs – Chanel, Picasso, Churchill or de Gaulle – and the great occasions of which it was a part, from the maiden voyage of the Normandie, the world’s most luxurious liner, to the supersonic splendour of Concorde.

Its carafe is a history in itself. A mysterious decanter unearthed on the site of a 16th century battlefield, whose precise origin and purpose will likely never be known. And yet, with its extravagant forms and regal fleur-de-lys emblems, it seemed predestined to hold this most extraordinary of cognacs.

Now, however, as you raise your glass, it is not the past that preoccupies your mind, but the present that seduces your senses. For Louis XIII is unlike any cognac have ever experienced before.