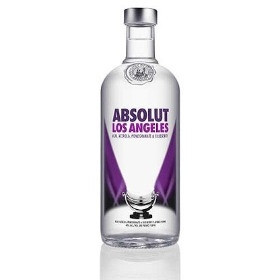 Absolut Los Angeles Vodka is the second multi-flavored vodka in the brands "city" line. The LA bottling is another special edition flavored with all-natural blueberry, acai berry, acerola cherry and pomegranate. Released in 2008 is also the rarest and the hardest find in the city series.


The ABSOLUT city-series has helped pave the way for flavor innovation in the vodka category. In the late 1980s, ABSOLUT® VODKA launched its "Cities" advertising campaign with a wink and a nod to the intrinsic flare and historical heartbeat of what makes each city special. In 2007, the brand brought the "Cities" campaign to life with the launch of ABSOLUT® NEW ORLEANS, a flavor reminiscent of the Big Easy. Every year since then, ABSOLUT has introduced a limited-edition flavor – ABSOLUT® LOS ANGELES in 2008, ABSOLUT® BOSTON in 2009, ABSOLUT® BROOKLYN in 2010, and now ABSOLUT® SF is honored as the fifth flavor in the city-inspired portfolio and 2012 Absolut Miami.